Sunday 24th May 2015, was in fact a great day for us. We had been planning for months with our daughters duo partners parents a fun day in our local area to help raise funds for them to go towards their dance expenses, stress levels were through the roof, sleepless nights worrying about forgetting something and stressing over the weather!!!

So the day started with the sun shining and us arriving at 6.30am to set the fete stalls up, set the area up for the boot fair and craft sellers and start organising the volunteers. We were busy setting up when we noticed the que of cars waiting to get in. It was then it became apparent, that all our advertising had in fact had an impact. We were taken by surprise, just how many people did come along for the boot fair/craft fair.

So once the day started we had many people come along which was just amazing and totally blew us away, and having the sun continuously shining down on us meant that more and more people came along and stayed for many hours!

It seemed that everyone else was also just as pleasantly pleased by the day as many come to both me and Maisie's duo Mum personally to say just how much fun they were having. This was also said all over the our event page and some have in fact asked us to make it an annual event… I think its going to take us 6 months to get over this one hehe…

We had many companies, both local and further afield who came along to support our event, to which we are very grateful for. We also had dancers from our daughters dance school who performed in teams, solos and duos. Alongside the local gymnastic club who did a display and there was also a display from the local Irish Dancing School too… We were very grateful to you all for supporting and performing on the day.. You guys were great, and certainly got people talking..

As parents, who haven't ever organised anything like this before, personally I think it was a success, many faces smiling, people laughing, children having a great time, families making memories, people earning some money from selling what they no longer needed and craft people selling their homemade items however hard you try to please everyone this has proved to be an impossible task..

There have been a couple of people who have moaned that they wasn't treated as royalty and positioned in what they call a 'hot spot', as apparently friends and family got priority.. Rubbish!!! We had 3 lots of family, and 4 lots of friends who attended as both craft and boot sellers and each of them queued up in the long line of others to be placed on the field. It is such a shame that these people felt the need to complain over something so small, all we can think of is the reason was because they didn't sell their items as well as they expected and were a little grieved.. Oh well the many positive comments out rule the negative two! 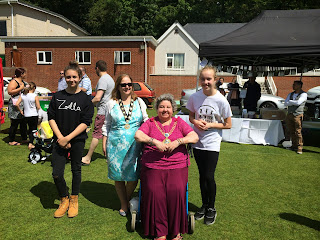 Here are our girls with the Mayor & Mayoress.


Below are a few companies who supported us and donated very generously to both our girls! 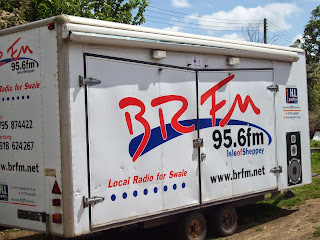 A very big Thank you to the guys from BRFM Roadshow, who were fantastic at our event keeping the public entertained.
http://www.brfm.net/content/article.php?id=5 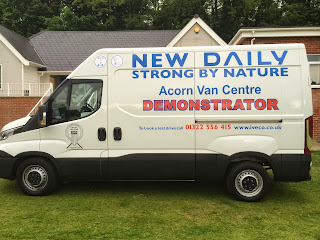 Massive thank you to Acorn Trucks for the donation of the van to get everything to the event and back.
http://www.iveco-dealership.co.uk/acorn/contact/54/acorn-truck-sales-limited-van-centre 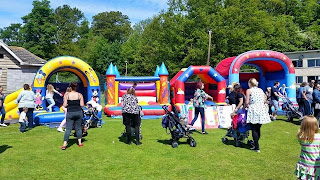 A huge Thank you to D & T Bouncy Castles, who donated very generously and helped out with the electricity during the day.
http://www.dtgardening.co.uk/bouncy-castle-hire.html 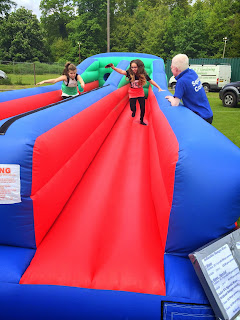 HSTC Inflatable Events for supporting us and making our day and others great with the Bungee Run!
https://sites.google.com/site/trampolinegymnastics/ 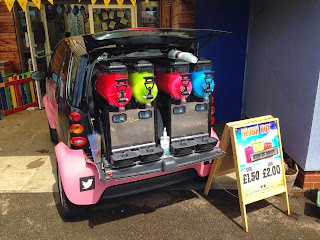 A Massive Thank you to Adam from the Slush Hut for coming along and generously giving to our girls fund!
http://slushhut.com
Have you attended any events this half term?
Posted by Mr, Mrs and Mini me's at 12:57 No comments:

Amelia has recently, really excelled in her reading. She has jumped two levels and her confidence has too.
Tonight we popped into Asda to grab a few bits for tea and both the girls asked if they could have a new book! Well it's better than sweets...
Amelia chose one of my childhood favourites 'The Twits' by Roald Dahl and Maisie got 'Looking for Alaska' by The award winning author of The Fault in our Stars John Green.
Amelia's favourite author has been Julia Donaldson, so reading this book is very different, but I'm sure she will have a new favourite author added to her list!!
Both girls couldn't wait to start their books so at bedtime tonight Amelia started hers instead of a bedtime story from mummy :-(. However listening to her add expression and giggle at the content was heartwarming. Maisie is finishing her other book first and then will start her new one.
These girls never fail to amaze both the hubster and I in their achievements and love for learning. 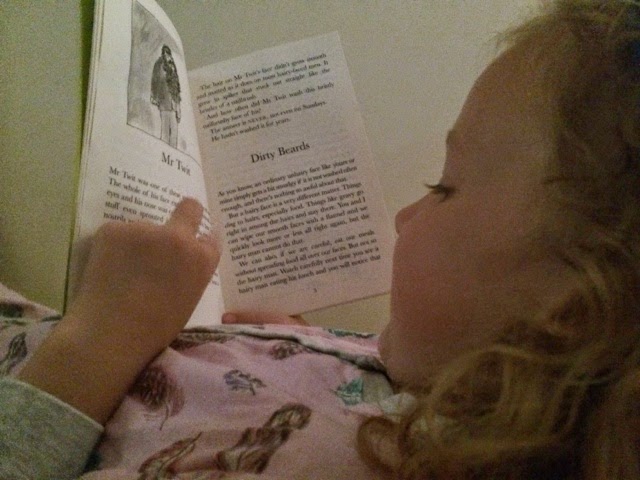 What books are your child's favourite?
Posted by Mr, Mrs and Mini me's at 15:31 No comments:

As promised here is the update on my daughters progress with her dancing.
On Sunday 10th May, Maisie competed in the British street dance finals in Luton. As normal Maisie trained hard, and this showed in her set during the competition. Maisie was ranked in the top 10 in the under 16s advanced category of the country for her solo and qualified for the European championships in Poland in June, so it's all hands on deck organising flights, hotels and hire cars!!!
Maisie and her duo partner also were ranked in the top 10 of the country in the under 16s advanced category and qualified for Europeans. The acheivents didn't end there Maisie's crew were ranked 2nd in the country and her team were ranked 3rd meaning that both qualified for the World Championships in Italy in October 2015..
I am officially grey, stressed and skint now after all the organising...
Not forgetting in between all this Maisie is competing in the Hip Hop Internationals in San Diego in August this year as well as other little performances which I will tell you all about soon!
The hubster is going to experience the dance life by taking Maisie to the Europeans. Poor man will not know what's hit him with all the different outfits and time slots etc!!
So here is to Team England!!!! Well done to all competing and representing our country. 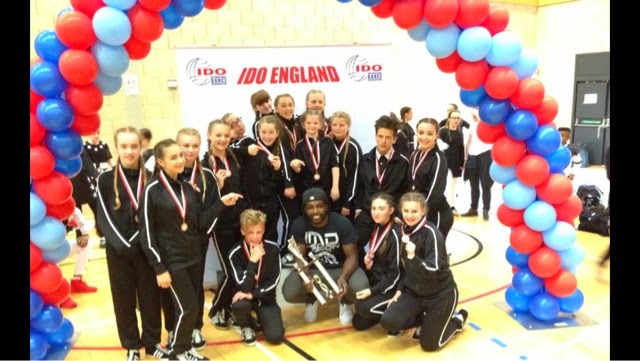 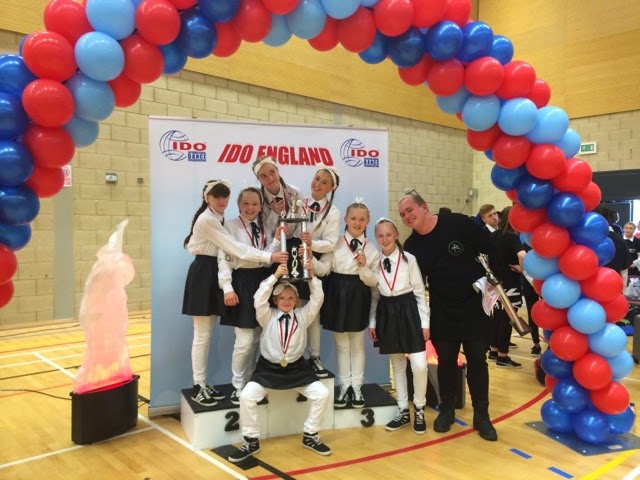 Maisie's crew 'Switch'
What sports/hobbies do your children compete in??
Posted by Mr, Mrs and Mini me's at 14:44 No comments:

On Sunday (03/05/15) it was another day for a dance competition. I took Amelia along to watch her first ever dance competition that her big sister Maisie was taking part in. Amelia loved every minute of it and never complained once!! (Which I really thought she would of got bored as it is so long a day)
Maisie took part in both her solo and duo at this friendly street dance competition and got amazing results... 1st place in both!!
As you can imagine we were very pleased and extremely proud!!
Next week Maisie is competing in the British Street Dance Championships in Luton for her solo, duo, crew and team. This is a very busy time for us in the dance industry so will keep you all posted of all Maisie's achievements. I will post as many pictures/videos as I possibly can. 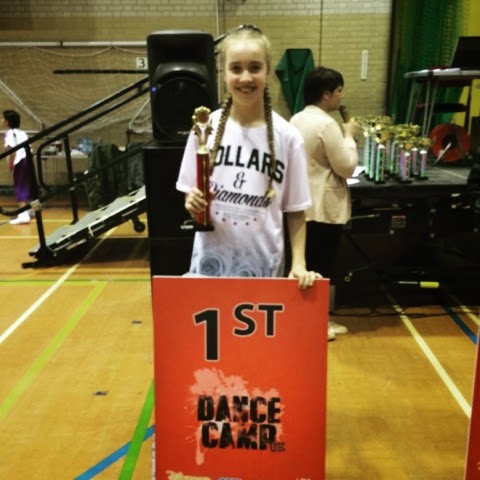 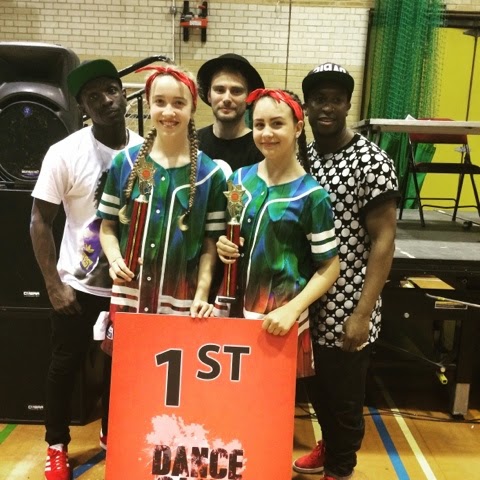 What hobbies do your children have???
Posted by Mr, Mrs and Mini me's at 14:13 No comments: